Spending Review 2015: we want your reactions!

This week, the government announced the outcome of the 2015 Spending Review exercise. The science budget was frozen in real terms, and we want to know what you think.

Firstly, we’d like to say an enormous thank you to everyone who attended our rally (in person or online) or submitted a postcard to George Osborne as part of our recent campaign. On Wednesday last week, we delivered your 1600 postcards to the Treasury, all with one overriding message: science is vital. 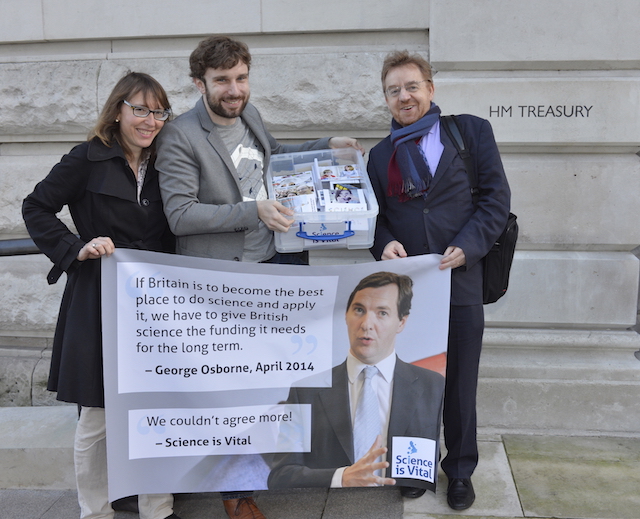 On Wednesday, the Chancellor announced the outcome of the 2015 Spending Review, with the news that the research budget was frozen in real terms through to 2020. This appears better than the outcome in 2010, when the budget was frozen in cash terms only and was subject to erosion by inflation. It is undoubtedly due in no small part to the passionate response of our supporters – alongside all the other groups who made strong representations to the government about the importance of science – that we secured this outcome.

While this is a relief compared to the cuts that were feared, in our view the settlement still falls well short of the robust investment in science that we really need to stay competitive internationally and to keep the economy growing. We feel the government has a chance to repair the damage caused by the flat cash decline of the past five years, but it has decided not to.

None of the details have yet been released, which means that the definition of the ‘science budget’ might be expanded, thereby diluting the whole. Even with no dilution, we will still be 20% worse off in 2020 as a percentage of GDP than before the last Spending Review in 2010.

Whatever your connection to science and research, we want to know your reaction to yesterday’s announcement. Leave a comment below, or email jenny@scienceisvital.org.uk, to let us know what you think. We aim to publish a selection of the responses, but please let us know if you don’t want your contribution not to be included or if you prefer not to be named.

2 Responses to Spending Review 2015: we want your reactions!