Five years on – science is under threat again and we need your help!

I’ve been a life scientist for more than 25 years. Like most researchers, I’ve experienced highs and lows. Trying to fathom the innermost workings of nature is a fickle business at the best of times. But what keeps us in the game is the curiosity to want to know how things work, and the passion to keep at it even when times are tough.

Times are especially tough right now. Science and engineering in the UK are facing an enormous threat – one that has come up quietly, one that’s all too easy to overlook amidst the preoccupations of daily life. It’s also easy to be complacent, but we ignore this threat at our peril. Science is Vital  – the grassroots pressure group I founded and still chair – needs your help to fight it once again.

Science is Vital was forged in 2010 by a grave political situation similar to the one we find ourselves in today. The coalition government had mooted the possibility of cuts of up to 40%, and the scientific community rallied together to make sure that this didn’t happen. We at Science is Vital played our part by joining forces with the Campaign for Science and Engineering to give a voice to the many thousands of people in the UK – scientists, engineers and their supporters – who don’t normally speak out.

But speak out we did: in a few short weeks, we’d mobilized 35,000 signatories on a petition – your name was one of them – and more than two thousand white-coated supporters rallying in the streets outside the Treasury. The press took notice, and so did the government. We were only one part of a broad front of protest, but several members of government publicly credited our grassroots campaign effort as crucial in influencing the outcome.

The flat cash settlement was a mixed blessing: relieved to have avoided the 40% cuts, we were nevertheless saddled with a science budget that would decline as the years went by and inflation took its toll. But although our economy has now pulled out of recession, the new government has no plans for reinvestment. Worryingly, it has asked the research councils to model the effect of cuts of 25 to 40%.

We need to act now, before the government finalizes the November Spending Review. We need to make sure that it’s fully aware of the public alarm over the damage severe cuts will cause to the UK’s science and engineering base – and to our economy and our future. Forty per cent cuts would be a catastrophe. But even flat cash would wreak devastation. I think nothing illustrates this better than a recent infographic from Scienceogram: 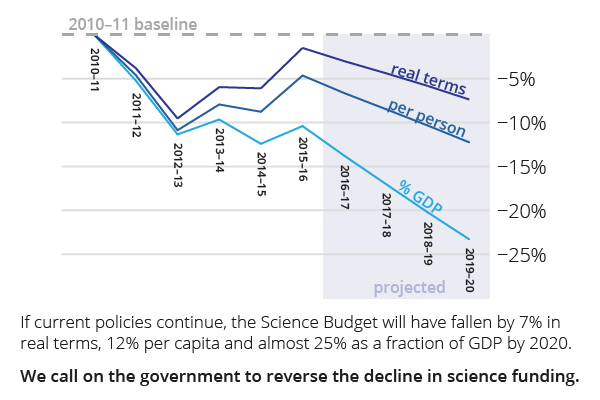 Please make your voice heard and get involved with our campaign. Here’s what you can do:

None of these actions will succeed unless we spread the word to as many scientists and engineers, and their supporters, as possible. This is where you come in. Please help us by disseminating news of our campaign throughout your network – use mailing lists, newsletters, social media, email, word of mouth – whatever it takes. The time is now for us to come together as we did in 2010 and tell the government that science is vital.