Now that parliament has been dissolved and the election campaign is in full swing, we are moving into the second phase of our Tell them Science is Vital campaign.

All the candidates vying for your vote on May 7th will be out and about in your constituency. So if you meet them – in the street, at hustings or on the doorstep – we’d really like you to ask them about science funding.

Ask them about their plans to ensure that the UK retains the world-class research base needed to boost the economy and tackle many of the problems – healthcare, climate change, energy and food supply – facing the country. And if they don’t have a plan, give them some ideas!

Remember that the freeze on science spending since 2010 means that the budget has depreciated in real terms by up to 20%. In fact, it has now dropped below 0.5% of GDP for the first time in 20 years. The time to act is now.

What can you do? 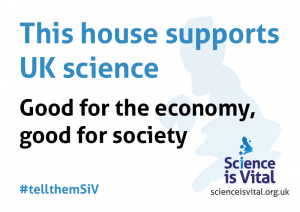 The Science is Vital election poster

We want you to help us push public investment in science and innovation to the forefront of candidates’ minds. To do that we are providing an eye-catching poster highlighting your support for science that you can put in the window of your house to be seen by any prospective candidate who might call.

We have also compiled a short set of questions that you might want to use when asking your candidate about what they can do to boost research in the UK:

Please tell us your stories

If you have an interesting encounter with a candidate, please tell us about it by emailing us (jenny[at]scienceisvital.org.uk). We may be able to share your story either here, or on Twitter or on our Facebook page to inspire others to join in with the campaign.

Thanks for your support!